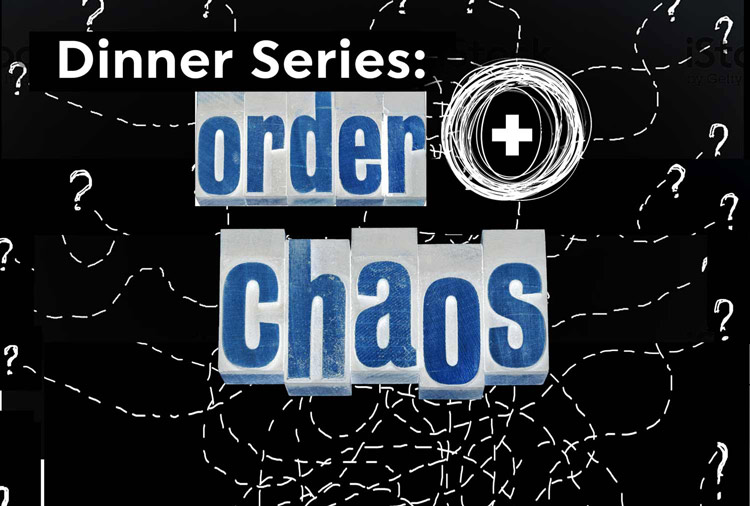 Picking a topic for this year’s dinner series was like trying to catch a falling knife. Amid the swirling chaos of each new political controversy du jour, it became increasingly difficult to even keep track of what we were talking about. Then it dawned on us that there may be only one thing that would last the whole year for us to talk about – the chaos itself.

As we now know all too well, order is hard to build and easy to destroy. Sure, democracy is a pretty chaotic affair by definition, but this chaos now feels dangerous and destructive and harder to control with each passing day. So we’d better be talking about it if we ever want to emerge from it – and with a more constructive result than the peeps in Washington seem to be achieving.

And because it’s our job to look at our topic from different perspectives, we got to thinking that one could make an argument that chaos itself is underrated. In the arc of history some pretty chaotic events are struggles resulting in real good in the world – say American independence and the civil rights movement for starters. If you’re someone who doesn’t appreciate the current “order” then it stands to reason that chaos looks good to you?

So we’re going with the theory that it’s possible that chaos can teach us something, even if it’s only an education in how to restore order – though we expect that if we listen really hard to people who see the world from a different angle than ours, there will be so much more.

“A Republic, if you can keep it. –Benjamin Franklin, at the close of the Constitutional Convention in 1787

“I have a great belief in the fact that whenever there is chaos, it creates wonderful thinking.
I consider chaos a gift.” — Septima Clark, whom MLK considered “the mother of the civil rights movement”