Democracy Reignited
“America Will Be!”
O, yes, I say it plain, America never was America to me,
And yet I swear this oath—America will be!
—Langston Hughes, “Let America Be America Again”

Learn more about all the programs in the series (and listen to past programs) by scrolling down.

The Village Square is partnering with Florida Humanities to present “Unum, Democracy Reignited,” a multi-year digital series of programs exploring the past, present and future of the American idea — as it exists on paper, in the hearts of our people, and as it manifests (or sometimes fails to manifest) in our lives. With each new season, we’ll bring you a series of digital programs from important thinkers that both capture the Zeitgeist of America’s public conversation and seek to transform and transcend it — toward a more perfect union.

Walt Whitman wrote that to meet the challenge of this American democracy we must “travel by maps yet unmade.” As we strive now to make manifest the promise of a diverse multi-racial democratic citizenship, perhaps we are once again inventing what was first imagined almost 250 years ago. Because if we are to rise into our lofty ideals, who else but “we the people” will lift us into them? To accomplish this, we’ll seek the wisest counsel from sea to shining sea, to light our way on a journey that “will yet swell the chorus” of our union.

“Democracy Reignited” comes to you packed with inspiring and important featured reading — built in partnership with the big thinkers we’ll gather — that might just change the way you see the world around you. With partners in communities across the great state of Florida, we’ll bring you opportunities to join in.

We find ourselves at a crossroads — when America’s promise of a democracy “of the people, by the people and for the people” is in existential danger — from both inside and out — with illiberal and intolerant behavior coming from across the political spectrum and (if that weren’t enough already) attacks from hostile foreign powers who rule by intimidation rather than govern by consent. So what are citizens who want to continue to breathe free and pursue happiness to do when our freedom to make America’s promise manifest in our lives feels under siege?

Whether you’re a Black American seeking the promise yet fulfilled, a person of faith trying to live your life out in an increasingly secularized world, or a citizen just wanting to express an opinion in the American tradition of dissent without retribution, we have no choice but to endeavor to find each other again in common cause.

Musician Daryl Davis befriended over 200 KKK members, starting with a grand wizard. (Don’t try this at home, kids.) We’ll learn how his improbable, impossible, openhearted journey can light our way.

Chris Stirewalt gives us an inside view of the rage-driven political environment we’ve found ourselves plunged into. From Amazon on his book “Broken News:” “Rage revenue-addicted news companies are plagued by shoddy reporting, sensationalism, groupthink, and brain-dead partisan tribalism. Yep. 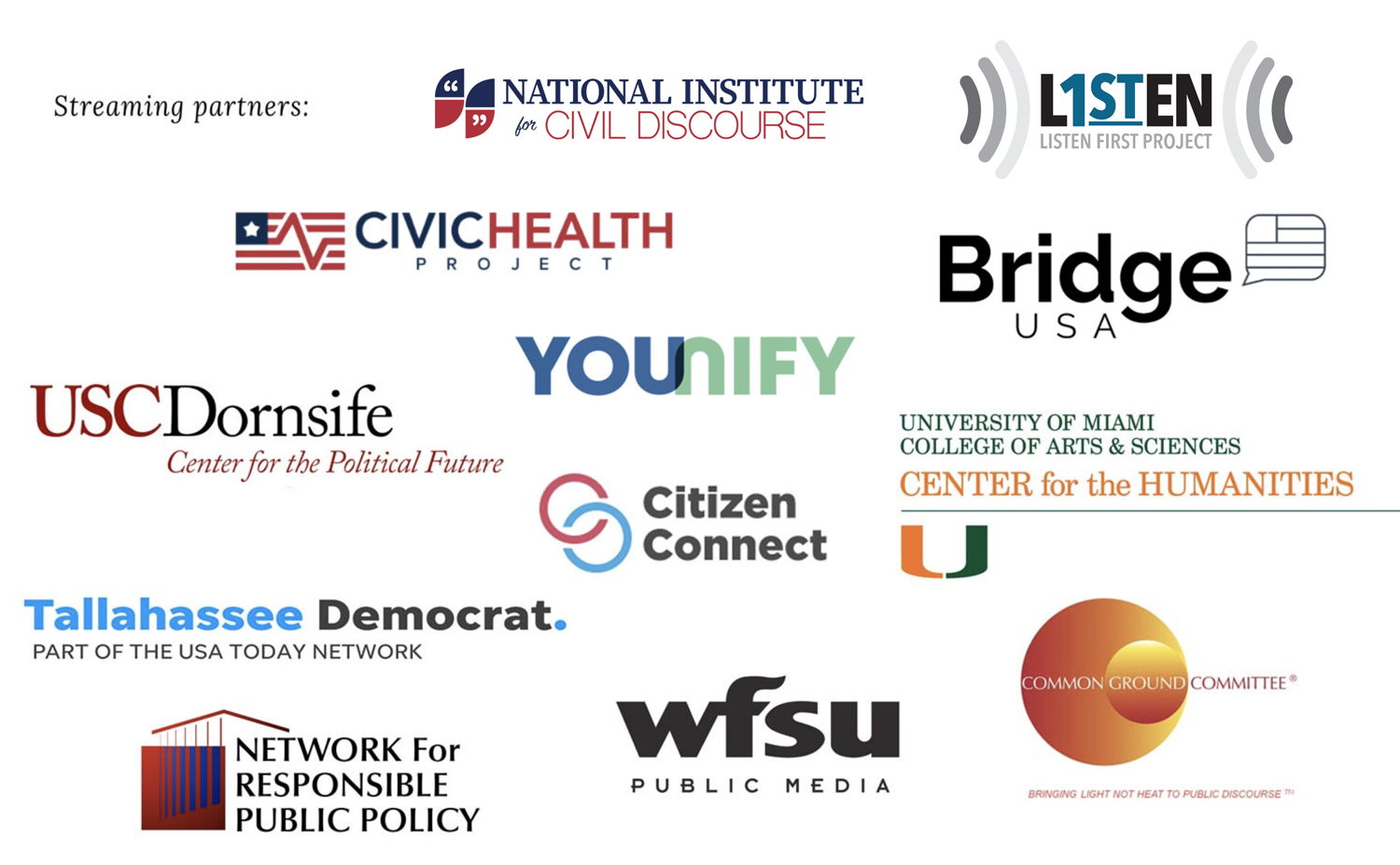 Chloé Valdary has a fresh take on how to heal racism and bigotry—and she’s named it the “Theory of Enchantment” or “ToE.” The three laws of enchantment: “treat people like human beings not political extractions,” “criticize to lift up and empower, never to tear down and destroy,” and “root everything you do in love and compassion.” Hmmm…

past event | October 2022
Mónica Guzmán:
I Never Thought of It That Way

According to our special guest Mónica Guzmán, seeing where people are coming from isn’t just possible—it’s how we ought to be living our lives. “The barriers between us are lower than we think.” Find the answers you need by talking with people—rather than about them—and asking the questions you want across the divides you want, curiously.

past event | september 2022
How to Have Better Political Conversations or: Ending This Zombie Apocalypse

Join Dr. Robb Willer, professor of psychology and sociology at Stanford University and director of their Polarization and Social Change Lab, for a highly-relatable hero-arc journey to save democracy (and possibly ditch a few zombies along the way).

past event | thursday, march 31 @ 7 pm ET | Via zoom
When the Stars Begin to Fall:
Renewing the Promise of America

Dr. Theodore R. Johnson sees both a Promise “big enough for all of us,” and an existential threat if we cannot somehow find each other to live into it. And at a time when it’s easy to be overwhelmed and confused, he lights a path forward that we might travel together—with a wisdom and clarity that draws us in.

We talk a lot about becoming a majority minority country, but not much at all about how to adjust to demographic changes that are already causing tumult across America. Dr. Justin Gest brings us the best ideas from countries that have experienced major population transitions—with his trademark human empathy.

past event | November 2021 | Unum, democracy reignited
The Constitution of Knowledge:
A Defense of Truth

What if defenders of truth are missing the most fundamental conceptual revolution at the core of this American experiment, the western world and — heck — even the enlightenment itself? Join us for an important conversation with public intellectual Jonathan Rauch that you won’t soon forget. Offered in partnership with Florida Humanities.

Part democracy’s orator and part its master mechanic,
Dr. Danielle Allen is uniquely equipped to guide us to the other side of our current crisis of faith in democracy. This is a program you will not want to miss. Offered in partnership with Florida Humanities.

Past event | August 2021 | Unum, democracy reignited
High Conflict: Why We Get Stuck and How We Get Out

When we are baffled by the insanity of the “other side”—in our politics, at work, or at home—it’s because we aren’t seeing how the conflict itself has taken over. Join an intimate conversation with Amanda Ripley, one of the most consequential journalists of our time.