a forum for fierce community collaboration
The club of honest citizens

In the spirit of Benjamin Franklin and the tradition of invention and association that has always made America unique, Leon County Government and the Village Square invite local college students from across our community to join us for “Company, Chat, A Laugh, a Glass” and “wise Sentences.” This is a unique opportunity to meet local leaders and practice Leon County’s fierce community collaboration.

In the years prior to the American Revolution, one of its preeminent architects – Mr. Franklin – informally gathered interesting people in London pubs and coffeehouses to think. Out of these social events came ideas like police forces & volunteer fire departments, the first public libraries, hospitals and universities, paved roads – even oxygen. Like Franklin, we think brilliant ideas can come from riveting conversations (and we think it’s the right time for brilliant ideas).

In the spirit of tradition of Mr. Franklin and the invention and association that has always made America unique, we invite you to join us for “Company, Chat, A Laugh, a Glass” and “wise Sentences.” 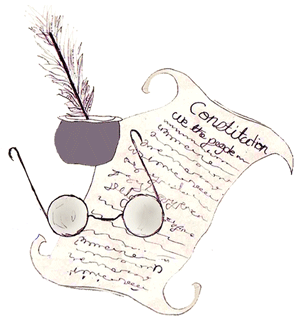 The Club of Honest Citizens takes a page from this unique American history. Coffeehouses and pubs played an important political role in pre-revolutionary London and planted seeds that would ultimately also grow in our American democracy.

The coffeehouse in particular came to be portrayed as an antidote to drunkenness and violence, and coffee was seen as a catalyst for pure thought, sophistication and wit. The introduction of this new brew from Arabia meant an end to alcohol as the drink of choice throughout the day, playing a real role in the enlightenment, as humanity finally emerged from an alcohol-induced fog. With a one-penny charge for admission and coffee with unlimited refills, it meant that political discourse was suddenly accessible to the average person, something that the British crown so disliked that King Charles II attempted to crush them in 1675.

A ‘coffee-house politician‘ referred to someone who spent the day sharing his opinion on matters to anyone who would listen. Coffeehouses brought people and ideas together; they hosted a unique collaborative environment that inspired ideas that would help Britain lead the world. Yet, while listening and talking to strangers – sometimes for hours on end – was a founding principle of coffeehouses, it’s something we can barely imagine today. We think that needs to should change.

*Coffeehouse disclaimer: In 1674 the Women’s Petition Against Coffee asserted that the “newfangled, abominable, heathenish liquor called coffee” had transformed their previously industrious spouses into useless layabouts.

Monday, May 6 | 6:00 PM | St. John's Episcopal Church
Club of Honest Citizens presents: How do we grow from here?

In 20 years, what will your neighborhood, city, and county look like? Our decisions today will build a legacy. Let’s be intentional about what that legacy will be.

PAST EVENT | December 2018 | the junction at monroe
Eric Klinenberg:
Palaces for the People

How Social Infrastructure Can Help Fight Inequality, Polarization, and the Decline of Civic Life.

PAST EVENT | JANUARY 2018 | in partnership with Leon County
Created Equal: A conversation about
race + founding ideals + our hometown

In the wake of tragic events in communities of color across America, we can’t quietly wish this were someone else’s problem. If we’re going to live into the long-promised vision of our founders that “all men are created equal,” we’re probably going to have to get a little uncomfortable first.

Neil Phillips of Visible Men Academy joined us for a riveting conversation on race, featuring his keynote speech Race to Truth. We invited our audience to take the 5-Feet Challenge and launched The Book Club on Race.

past event | Spring 2015
The Club of Honest Citizens: A Forum for Fierce Community Engagement

In the years prior to the American Revolution, one of its preeminent architects informally gathered people in London to think. Out of social events like these came ideas like police, public libraries, even paved roads. Like Franklin, we think brilliant ideas can come from riveting conversations.

Leon Trees is a grassroots coalition of citizens and organizations committed to the promotion and protection of trees that hold historical significance and extreme aesthetic value to Tallahassee and Leon County Florida.